Do Birthmarks Need to Be Treated?

Most birthmarks need no treatment. They usually remain stable as a child grows older. However, some areas that can resemble blood vessel tumors — called hemangiomas — may need treatment because of their location. For example, a raised hemangioma near a child’s eye may interfere with their ability to see. In rare cases, birthmarks are associated with other conditions, such as growths in the liver, lungs, stomach, or intestines.

Hemangiomas and Your Skin

The hemangioma is a common type of vascular tumor that may occur early in life and resemble a birthmark. It is usually painless and harmless and its cause is not known. Color from the birthmark comes from the extensive development of blood vessels at the site.

Types of hemangiomas and birthmarks include:

What Are the Signs of Red Birthmarks?

Signs of red birthmarks include:

How Are Red Birthmarks Diagnosed?

In most cases, a health professional can diagnose a red birthmark based on the appearance of the skin. Deeper birthmarks can be confirmed with tests such as MRI, ultrasound, CT scans, or biopsies.

What Is the Treatment for Hemangiomas and Red Birthmarks?

Many capillary birthmarks such as salmon patches and strawberry hemangiomas are temporary and require no treatment. For permanent lesions, concealing cosmetics may be helpful. Topical timolol, a beta-blocker medication, can be used safely for hemangiomas that are growing. Oral corticosteroids can reduce the size of a hemangioma that is growing rapidly and obstructing vision or vital structures.

A new and very promising treatment for serious hemangiomas is propranalol, a drug usually used for the treatment of high blood pressure.

Port wine stains on the face can be treated at a young age with a pulsed dye laser for best results.

Other treatments for red birthmarks may include:

In some cases, birthmarks are not treated until a child reaches school age. However, hemangiomas are treated earlier if they compromise vital functions like vision or breathing or make the child self-conscious.

Can Hemangiomas and Red Birthmarks Be Prevented?

Currently, there is no known way to prevent hemangiomas or red birthmarks. 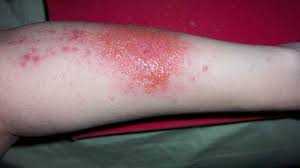 What Is Eczema? Eczema is a group of conditions that make your skin inflamed or irritated. The most common type is atopic dermatitis or atopic eczema. “Atopic” refers to a…